Bush and the price of gas

While spikes in energy prices, like that suffered by poor Jimmy Carter, can doom a presidency, no occupant of the White House has ever seen his popularity so closely tied to the price of gas. In fact, more than three-quarters of the variation in W's approval rating since he took office in January 2001 can be explained by movements in the numbers diplayed on pumps nationwide.

Here are two charts that make this point. First is a simple history of the gas price (from the EIA — here's the long-term history and here's the update) plotted with Bush's approval rating, according to Gallup (here's the link, but you have to be a subscriber to get the data). The gas price is inverted, so that higher values are plotted below lower values, so as to match the trajectory of the approval rating. The last part of the gas line, the dashed segment, plots a projected value for October of $2.51, which is where it probably will be based on a NYMEX crude oil price of just under $64, which is where it was on the afternoon of September 14. 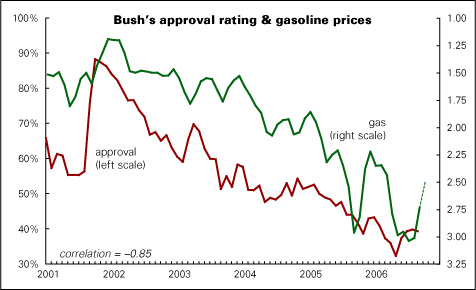 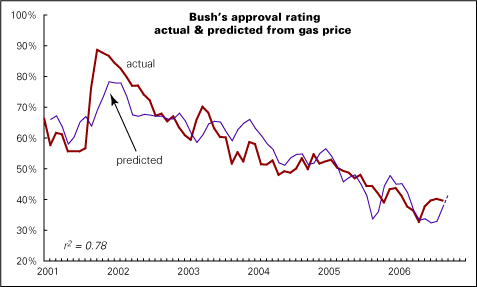 There's no precedent for this tight relationship. Approval ratings for Clinton and Reagan were mildly influenced by gas prices, but Bush 41's seems not to have been at all. That may mean that the gas-dependency of W's popularity may actually be a reflection of other things: the war in Iraq has driven up gas prices, as did Hurricane Katrina. So the approval rating, rather than being "caused" by gas itself, may just be reflecting growing public dissatisfaction with the war and the stunning incompetence in handling Katrina. But it's remarkable how closely the approval line follows almost every quiver in the price of gas. So if Bush wants to keep from matching Carter's 28% and Nixon's 25% lows (the worst approval ratings of the past 50 years), he'd better get Cheney to make sure that gas prices keep falling.