The following article appeared in Left Business Observer #113, May 2006. It retains its copyright and may not be reprinted or redistributed in any form - print, electronic, facsimile, anything - without the permission of LBO.

A nation of (yesterday’s) immmigrants

For some not-fully-fathomable reason, immigration has gone from a simmer to a boil as a political issue in recent months. If you listen to the likes of Bill O’Reilly, Mexicans who’ve crossed the Rio Grande without appropriate documentation are stealing our jobs, freeloading on public services, and corrupting our morals. It’s almost conceding too much to this raving xenophobia to pay it the courtesy of a factual refutation, but somebody’s got to do it.

Though definitive evidence is hard to come by, because of less-than-perfect data, most studies of the effects of immigration on wages and employment for the native-born find little or no effect. Several economists have gotten around the data limitations by doing what are called “natural experiments,” which in this case are what happen when a sudden influx of immigrants lands in a specific region. David Card of Princeton studied the effects of the arrival of 125,000 Cubans in Miami during the Mariel boatlift in 1980; his conclusion was that there was no significant effect on either employment or earnings. Jennifer Hunt studied the effects of 900,000 people repatriated from Algeria to France in the early 1960s, and similarly found little effect. Ditto Rachel Friedberg’s work on the effects of Russian immigration to Israel in the early 1990s after the collapse of the USSR. Interestingly, Card’s Cubans were mostly low-skilled, and Friedberg’s Russians mostly high-skilled—yet both sets of new arrivals had similarly minimal effects.

Also, many economists have compared the wage structures (e.g., the gap between the earnings of college graduates vs. high-school dropouts) of cities and states with high and low shares of immigrants, and found the immigrants share of the population to be of little or no influence. Wage structures aside, it also looks like immigration has no effect on broad economic trends—in fact, immigrants are drawn to locations with strong economies, and shun those with weak ones. A simple version of this: most of the cities in the graph below with high immigrant shares had above-average income growth between 1980 and 2000; those with low shares, below-average growth. 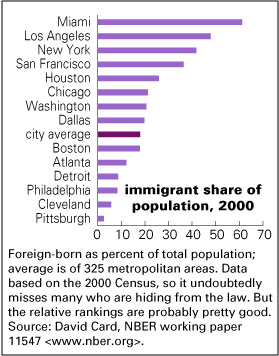 But the Harvard economist George Borjas—himself a Cuban immigrant who now acts like he wants to shut the door behind him—argues that comparing local labor markets is wrong, since people and capital are mobile. Native workers might leave a city that had experienced an immigrant influx—or, like immigrants, gravitate towards high-wage cities. Instead, argues Borjas (writing with Lawrence Katz and others), the national labor market is the proper unit of analysis. Borjas & Co., working with heroic models with heroic assumptions about the mobility and substitutability of capital and labor—statistical systems that are always highly susceptible to assumptions—find that high-school dropouts have taken a 4–8% wage hit because of immigration between 1980 and 2000. The rest of the educational distribution took smaller hits. Missing from this analysis are the words “union” and “minimum wage,” making it incomplete and tendentious, since it’s likely that union-busting and the eroding value of the minimum have had more effects than immigration ever could. And there appears to be no evidence that natives actually migrate in the ways that would be required by Borjas’ assumptions.

In a recent review of the field, the excellent economist David Card notes that studies like Borjas’ are based on “the belief that labor market competition posed by immigration has to affect native opportunities, so if we don’t find an impact, the research design must be flawed.” Card is very familiar with these convenient assumptions; back in the 1990s, he showed, contrary to the deepest faith of most economists, that increasing the minimum wage doesn’t destroy jobs; economists resisted his evidence because it just couldn’t be true. But it was.

Another frequent argument against immigrants is that they suck the Treasury dry by their profligate use of public services; according to the polls, this is the public’s biggest problem with our new arrivals. But according to sociologist Douglas Massey, who’s spent more than twenty years studying Mexican migrants, immigrants pay more in taxes than they use in services (and their service use has declined in recent years). Many undocumented workers pay into Social Security system with no hope of ever drawing benefits. Even alarmist studies by anti-immigrant groups make claims like “immigrants costs the federal government $10 billion a year!” without disclosing that that sum represents 0.4% of total expenditures.

Enemies of immigration also complain that the offspring of our new arrivals cause problems, from their birth (often at public expense), through school, and into a presumably parasitical adulthood. This too turns out not to be true. David Card has studied the children of immigrant parents (who, by the way, now comprise more than a tenth of all American teenagers), and found that they tend to acquire more years of education than do the children of native-born Americans, and out-earn them as well.

Even accepting the most extreme estimates of the costs of immigration—which is totally unwarranted, but let’s do it momentarily for argument’s sake—it’s clear that unauthorized immigrants are responsible for at most only a tiny fraction of our economic and fiscal troubles. And that’s the worst case you can make. A more honest case is that they’re contributors to our society—people who work very hard at often crappy jobs, and get a lot of guff for their trouble. And, by revitalizing aging cities and neighborhoods, and by bringing new cuisine and music, they add to American life in ways that econometric models could never capture.

There’s something rather disturbing about applying this sort of cost–benefit logic to human beings. Raising the discourse to the higher level of political principle, it would be very hard to mount an admirable argument in favor of sealing our borders. At the risk of sounding like John Lennon, wouldn’t an earthly utopia be one without national borders and people free to move as they liked?

While there would be enormous practical problems involved in suddenly opening borders, the strongest arguments in principle against that sort of opening would have to reduce to xenophobia, a deep belief in the virtues of cultural purity (as if there weren’t enormous variations of class and temperament within individual cultures), or some attempt to preserve our privileged status in a world full of very poor people. None of these are very attractive when stated baldly.

But they’re entirely harmonious with some of the prominent themes in American politics since 9/11—or, if you’re more historically minded, since 1776. Earlier generations of immigrants and their descendants are often quick to demonize the latest vintage of arrivals; it’s almost a rite of passage towards Americanization (as is demonizing black Americans). The latest upsurge of immigrant-bashing seems to be coming from right-wing politicians and activists, who see the president’s poll numbers dropping and much of the right agenda in trouble, and are consequently looking for something to stir up a little pseudo-populist trouble. That agitation finds a receptive audience among people who are scared about their losing their jobs and their social status. It’s always easier to blame foreigners for our troubles (Chinese workers, outsourcing to India, as well as immigrants from unfashionable places) than it is to look at their domestic roots. 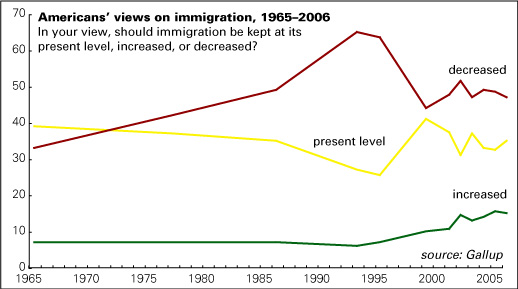 Curiously, although the public discourse has turned more anti-immigrant recently—at least until the inspiring outburst of immigrant organizing and public demonstrations—American public opinion has, if anything, been turning more immigrant-friendly over the last decade or two. (Opinion towards immigrants also moves with the business cycle—more hostile in recessions, more welcoming in booms.) Strong anti-immigrant feeling looks to be the monopoly of a relatively small part of the population. In a Pew survey, 80% of respondents said that Latino immigrants work very hard and have strong family values, and only a third thought they turned to crime or welfare. That third is probably dominated by a hardcore white nativist faction (blacks, and of course Asians and Latinos, are less hostile towards new immigrants than are whites).

Interestingly, Pew finds that opposition to immigration is strongest in areas with few immigrants, and lowest in areas with many. That suggests there’s something phantasmic about strong opposition to immigration—some anxieties about contamination that might be immune to the sort of factual refutations that dominate this piece. But for the rational part of the population, these are the facts.