Jonesing for a slump

Abroad, the austerity party is led by Germany, with some neighboring allies, whose approach to the Eurocrisis is to put the depressed periphery through the wringer and cut budgets modestly at home. So far, the German economy has been holding up well, and German capital seems not to fear a hit to exports coming from a deep recession at the fringes of Europe.

At home, orthodox types across the political spectrum are now obsessing about the horrors of mounting U.S. indebtedness. Although the Obama administration isn’t embracing the austerity agenda passionately, they are taking it far too seriously. 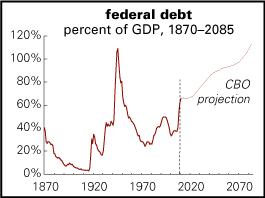 The nearby graph, based on projections from the Congressional Budget Office (CBO), looks alarming, with U.S. debt rising steadily for the next 75 years to levels, when measured against GDP, haven’t been seen since the end of World War II.

This sounds alarming, but there are reasons to hold off a call to 911. The big increase that came from the Great Recession, the bailouts, and the StimPak is largely over. It took federal debt held by the public from 37% of GDP in 2007 to a projected 65% next year, when the emergency spending will peter out.

But debt, by the CBO’s reckoning, doesn’t begin to rise seriously again until the 2020s. The main culprits are, as anyone familiar with this territory can easily predict, “entitlements,” meaning Medicare, Medicaid, and other health spending, and, to a much lesser extent (though this comparison is often elided in the more heated commentaries), Social Security. Expressed as a percentage of GDP, total health care spending is slated to rise by 11 points, and Social Security, by 1 point. Even if the Social Security projection is correct—and, as LBO has been arguing for years, there are many reasons to believe that that it’s cracked—a point over seven decades is nothing to worry about. Health care’s 11 points are a problem, but they’re a product mainly of our crazy health care financing system—still as crazy as ever, despite “reform”—and not a problem to be addressed through fiscal hysteria.

And, as with the official Social Security projections, the CBO assumes an extremely low trend long-term growth rate. After a not-so-vigorous recovery from the recession running through 2015, the CBO projects that the U.S. economy will grow at an average of 2.0% a year for the next seven decades. As was pointed out in the last issue, productivity guru Robert Gordon projects the U.S. economy growing at a trend rate of 2.4% a year over the next several decades, or 1.5% per capita. We’ve never had sustained aggregate growth rates as low as Gordon’s projections since decent numbers begin in the early 19th century, and per capita rates that low only at several points during the 19th and early 20th centuries. (Population growth was often rapid in those days, which transformed impressive aggregate growth rates into underwhelming per capita rates.) The CBO’s numbers are even lower—lower than anything we’ve seen in more than a century.

Long-term projections like this are risky. Who knows what technological breakthroughs, ecological disasters, or political transformations might radically change our growth prospects between now and 2084? But let’s for a second assume that there’s some truth to the forecasts. If there is, then we can assume that the Great Recession was merely an overture to the worst performance the U.S. economy has exhibited in at least 200 years. Shouldn’t that be what we’re talking about, and not the need to hack away at entitlement spending?

But that’s not all, as they say on TV. Recall that CBO’s projections of serious structural budget problems don’t kick in for more than a decade. Yet the orthodox are now trying to organize a budget-cutting party on the basis of graphs like the one above. There are at least two sets of reasons to find this worrisome—one short-term, the other long.

The short-term issue is, of course, that the economy is struggling to get off the mat, and not doing a very impressive job of it. After a burst of strength in job growth and consumer spending in the first months of the year, things faded notably as spring turned into summer. There are no signs yet that the economy is slipping back into recession—though the ECRI leading index (see graph nearby), 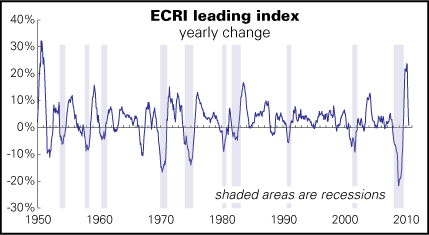 which anticipates broad economic trends three to six months out, is falling back to the zero line after a strong showing late last year and early this. This suggests that the slowdown will be sticking around. And while the index has issued false alarms in the past, should it penetrate seriously below the zero line, the likelihood of another leg of recession would rise to near-certainty. Yet in the face of this, much of the business elite and the people they pay to think for them are calling for aggressive deficit-cutting, and using dubious forecasts of our fiscal fate in 2084 to scare a confused public into assent.

The public is very confused on the debt issue, as any review of the polling evidence would reveal. It’s rarely volunteered as a leading problem, but people will express appropriate concern if they are asked specifically about it. But what worries them exactly? There’s certainly a moral disapproval of debt—a disapproval that doesn’t always extend to their own private affairs—and it’s a prominent symbol of economic ills. Yet when asked specifically if they approve of cutting Social Security or Medicare to balance Washington’s books, they do not. In fact, respondents tell Kaiser pollsters that they’d rather increase taxes on the rich to pay for Medicare than put the squeeze on benefits. And support for Social Security is both broad and deep.

But when folks like Obama advisor David Axelrod say that the administration has to respond to “people’s” concerns about debt and deficits, he may not mean the broad population. He may mean people like attendees at the Aspen Ideas Festival, a joint venture of the Aspen Institute and Atlantic Monthly magazine, where, as Lloyd Grove reports in The Daily Beast, there was much worry about all that red ink. The odious historian Niall Ferguson complained that Obama was turning the USA into a European-style welfare state. (If only.) He further worried that by extending unemployment benefits, the government is “encouraging laziness.” If there were any justice in this world, Ferguson would be forced to live on $307 a week (the size of the average benefit check). But instead he can feed his paymasters with fantasies of working class leisure—paymasters like Mort Zuckerman, who moaned in Aspen that Obama’s economic policies are so hostile to business that they’re turning the U.S. into a “second-rate power.”

A diminution of U.S. power would be deeply welcome, but it is delusional to call Obama & Co. hostile to business, and weird to indict the stimulus program, which could well have saved us from economic collapse, for doing us in. You have to wonder—what’s driving this lunacy?

In the European case, there is a materialist rationality: the Old World elite would like to crack what remains of working class strength and pare back the welfare state, and the current crisis offers a lovely pretext for pursuing that agenda. In the U.S., however, the working class is powerless and the welfare state virtually nonexistent. Rational reasons for debt phobia don’t spring immediately to mind.

It may be wrong to look for purely rational reasons, however. Anxiety about debt may be a displacement of an anxiety about the underlying health of the U.S. economy. If we are indeed facing unprecedented decades of stagnation, it might require a serious rethink of the entire U.S. economic model. Since that sort of thing is essentially unthinkable in orthodox circles, anxiety collects around the symbol of the problem—indebtedness, especially to China, the rising rival—rather than the problem itself.

Perhaps that’s too psychological. Maybe there really are some more vulgar materialist explanations. Some elite pundits think that the economy has survived its brush with death and it’s time for a return to normalcy. Related to that is the perpetual fear that deficits will lead to inflation. That seems far-fetched with the economy as deeply weak as it is, but if you think the weakness is merely transient, there’s no reason to fear deflation. Still, despite that farfetchedness, the fear has some powerful adherents.

And then there’s the fear that Greece is our future: a serious funding crisis in which lenders refuse to buy any more U.S. bonds. But there’s not even the remotest sign of that. And the evidence is that countries don’t face sovereign debt crises until their debt/GDP ratios break 100%. On the eve of its crisis, Greece’s ratio was 125%. Even on the CBO’s hysterical projections, the U.S. won’t cross 100% until 2074. Italy’s ratio is well over 100%, and Japan’s is approaching 200%, yet neither is circling the drain.

It’s long been LBO’s position that over the long term, deficits do matter. Building up large stocks of debt means paying rich people lots of interest instead of taxing them to fund more noble pursuits. For the next few years, though, the economy needs the stimulus of a deficit. And over the longer term, we desperately need a new economic model—a more equitable distribution of income, so that people aren’t forced to borrow to stay afloat, and more ecologically sustainable ways of living. Taxing and spending are the only roads to that better future. Both the short- and long-term perspectives make austerity the enemy of human progress.