Like this? Subscribe today! There’s a lot more where this comes from — and only some of it makes it to the web for free consumption.

Social Security’s crisis, and ours

When LBO last took on the Social Security problem with some depth, the Trustees of the system, who work out its official annual forecasts, had recently reported their very gloomy view of the future. The Trustees vision was of extremely slow economic growth and the insolvency of the system. The 2010 edition continues in the same vein. This is red meat for the austerity party.

In 1981, consumed with fear that the Social Security system would go bust in two years, Ronald Reagan appointed a commission led by Alan Greenspan, a recidivist hack, to “fix“ things. The fix consisted of boosting taxes, delaying cost-of-living adjustments, raising the retirement age, and taxing the benefits of better-off recipients. This rejiggering of income and outgo allowed the system to run big surpluses, parked in Treasury bonds, to finance the retirement of the baby boomers, then a prospect more than three decades in the future.

That surplus crossed 1% of GDP in 1990 and has averaged just over that ever since. It’s kept in the form of special-issue Treasury bonds, ones that aren’t tradable in normal financial markets. This arrangement is sometimes portrayed as the government “raiding“ this Trust Fund, which it isn’t. The Treasury, which is spending the money now, is nonetheless meant to pay Social Security back as the boomers retire. To do that, the government will have to raise taxes, divert spending from elsewhere, or borrow in normal markets. Should the government fail to do this, it would cast a pall over the creditworthiness of U.S. Treasury bonds, which are still, despite all our troubles, regarded as the soundest securities in the world. But the underlying economics are weird: though it makes liberals uncomfortable to admit it, it’s more than a little strange that any entity, even the U.S. government, can borrow from itself.

As the boomers retire, this surplus will, according to the Trustees, gradually evaporate as it’s drawn down—and then the system will be in a serious pickle. It will have enough income to cover only about three-quarters of its benefits—a shortfall of about 1.2% of GDP. That’s getting close to the 1.8% gap that Greenspan supposedly fixed almost 30 years ago. Apparently there’s just no getting ahead in life. 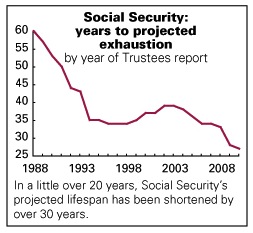 After Greenspan’s fix, the Social Security gap disappeared from official discourse for a few years, as the Trustees’ annual reports successively proclaimed the system to be in “actuarial balance.“ With the 1988 report, though, the funding gap returned: the Trust Fund was now projected to run out of money in 60 years, in 2048. (See nearby graph for the history.) Ten years later, the date with insolvency had been pushed forward by 16 years, to 2032. That was as close as doomsday would get for a while—come 2002 we had 39 years to go before coming up dry. By the middle of the decade, the pace of gloom had accelerated, reaching an all-time low of 27 years—2037—in this year’s report (released in August).

As LBO has noted many times in the past (1994, 1998, 2004, 2005), these projections are based on very gloomy economic assumptions. Specifically, the Trustees forecast that growth in per capita GDP (the total value of goods and services produced in the U.S. divided by the population) will average 1.7% a year from now through 2085. The long-term U.S. average—long-term meaning over the last 140 years—is 2.0%. But that projected average is boosted by a decent recovery they expect over the next few years. From 2015 through 2035, the fat years of boomer retirement, they foresee per capita GDP growth of 1.5%. There are few decades in U.S. history in which we saw growth rates this low (the 1930s were stronger), and no twenty-year period. That 1.5% growth rate, as the nearby graph shows, is close to what France and Germany have experienced over the last three decades, countries the U.S. elite used to patronize for their stagnant ways, and less than that of Japan over the same period, a country the U.S. elite used to think of as a basket case (until it started looking like a portent of our future). The Trustees do see growth perking up a bit by the end of the century—all the way up to 1.7% by 2085. 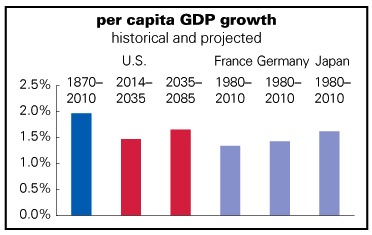 The major reason for the slow growth rate in GDP is that the Trustees anticipate productivity growth to be very slow from now through 2085—1.7%, well under the very long-term average of 2.0%. And combine that with what they project for labor force growth—0.6%, less than half the average of the last 50 years, and less than population growth—and you get aggregate GDP growth of 2.2% a year, more than a third below the average since 1870, and worse than any decade in U.S. history except the 1910s. And this is a growth rate that’s supposed to prevail for something like the life expectancy of someone born today.

These population projections are pretty much in line the Census Bureau’s. The Trustees’ labor force predictions are somewhat more gloomy than the Bureau of Labor Statistics’. They’re not implausible: other rich countries have seen population growth slow to a crawl—and if the ugly attitude towards immigrants persists, then we won’t be getting much fresh blood from abroad. Besides, a country in the grip of economic stagnation isn’t a very appealing place to move to.

In any case, these low growth numbers—in overall GDP, per capita GDP, and population—would mark a profound transition for a country that has long known far more rapid rates of growth. When LBO first started doing these analyses, we thought that the numbers were implausibly low. They still seem that way. More on that in a bit. But even if they are true, the gap between Social Security’s income and outgo is in the realm of what the Iraq war has been costing us (as a percentage of GDP). It’s about half the increase in the Pentagon’s share of GDP since 2000. It’s about a quarter of the annual income of the richest 130,000 households in the country. 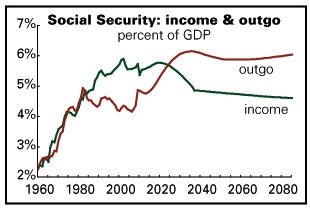 In other words, the gap, should it materialize, is entirely manageable and not cause for the slightest alarm. But our Austerians, as some wit named them (combining “Austrians,“ who besides being a nationality are also a school of right-wing economists who believe in minimal government, with “austerity,“ which makes for a potently toxic mix) want to use fear of Social Security’s bankruptcy as an excuse to hack away at social spending and promote the privatization of the system—meaning handing it over to Wall Street.

Yet, that aside, maybe these implausibly gloomy prognostications are an expression of the bourgeoisie’s unconscious worries. Publicly, we must revere our economic model as the envy of the world; as the President implausibly said recently, there isn’t a country in the world that wouldn’t trade places with the U.S. The Great Recession came not merely from the normal mechanisms of the business cycle, but some serious structural pathologies—the lack of any dynamic leading industries since the bursting of the 1990s tech bubble; a vast polarization between rich and poor that left the middle ranks dependent on debt to keep themselves and the wheel of consumption going; the looting of the productive sector by financial interests and the upper classes; and the constriction of public spending on physical infrastructure, education, and social well-being, just to name a few. Maybe these projections, however nastily appropriated by the belt-tighteners, are something of an admission of serious problems that can’t be described as such.

Several issues ago, this newsletter wrote up the projections of economist Robert Gordon, forecasting GDP and productivity growth numbers pretty similar to the Social Security Trustees. Gordon’s reasoning was that corporate investment is low, technological innovation has slowed, and the younger people are failing to surpass their elders in education (the U.S. is one of the few countries in the world where that’s the case).

If it weren’t for that persistent thing called ideological hegemony, the real debate would be over why our economy may not be up to filling a basic need—keeping the elderly in a decent retirement—rather than hacking away at this immensely successful and popular program. But the hegemons prefer austerity, which will only make things worse.