Like this? Subscribe today! There’s a lot more where this comes from — and only some of it makes it to the web for free consumption.

In and out of school

It’s remarkable how similar the U.S. educational system is to our health care system: by world standards, we spend gobs of money on both, and both yield underwhelming outcomes. With health, we’re in a class by ourselves, spending a two-thirds higher share of GDP than the OECD average (a share bigger than any country in the world, by a long shot) to produce some of the worst health indicators in the First World. We’re not so egregious on education. We spend just a third more than the OECD average, the second-highest of any country, to produce merely mediocre scores on internationally comparable tests. But there’s a pattern there, don’t you think?

We’ll take a close look at educational outcomes in the next issue of LBO. For this first pass, let’s examine the dimensions of spending, and the enrollment and attainment numbers.

In 2007, the U.S. spent 7.6% of GDP on education, 1.9 points above the OECD average, and exceeded only by Iceland. (See the box at the end of this article for data details.) But before this is turned into a right-wing, “See, you just can’t throw money at this problem,” homily, several factors lurking below this fat headline number must be discussed. 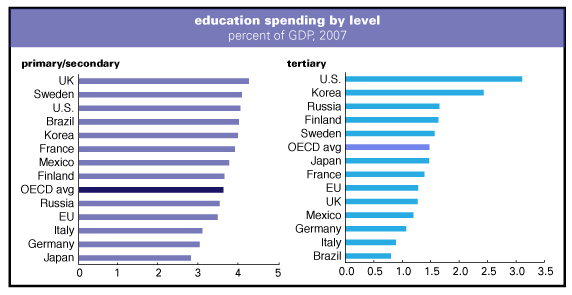 And despite all that spending, a surprisingly small share of our population is in school — at all levels. The OECD presents data on the number of years for which 90% or more of the population is enrolled. The average is 13 years; in most Western European countries, it’s 14 or more. But in the U.S., it’s just 11 years, tied with Mexico, behind Slovenia and just two years ahead of Brazil. Enrollment rates for those aged 5–19 are slightly below the OECD average — and somewhat further below the EU average. Enrollment rates drop the further up the age ladder you go: less than a quarter — 23% — of Americans in their 20s are enrolled in some sort of school, 2 points below the OECD average. (That despite spending a bundle on tertiary education.) And the U.S. isn’t lagging because college is delayed until later in life; we’re also below average for people over 30.

Underperformance is even more extreme at the other end of the age spectrum: just 47% of 3–4 year olds are in preschool, 24 points below the OECD average, and 3 points behind Brazil. In most Western European countries and Japan, preschool is nearly universal. Many studies have shown that kids who go to preschool do better in school, make more money, get along with other people better, and are less likely to end up in jail than those who don’t (though of course the Cato Institute doesn’t want to hear that). 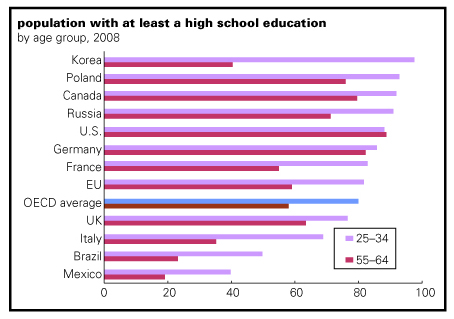 All this underenrollment really adds up. This newsletter has previously quoted Robert Gordon’s observation that the U.S. is about the only country in the world where the educational attainment of the younger generation hasn’t surpassed that of the older. There are two reasons for this. One is that older Americans are more educated than their counterparts around the world; 89% of those aged 55–64 have high school diplomas as their highest degree — a legacy of the days when we led the world in mass education. That’s the largest share of the 35 countries covered — 31 points above the OECD average, and 30 above the EU average. (See graph above. Sadly, there’s no data for Japan.) It’s also a high bar for the young to surpass. But they’re not even matching it: of those aged 25–34, 88% of Americans had diplomas, 11th in the OECD universe — down a point, and just 8 points above the average, 6 points above the EU. The rest of the world caught up and sometimes surpassed a U.S. that could barely stay in place.

Breaking down expenditures by category is no more flattering to the U.S. than the enrollment numbers. Almost 12% of U.S. spending on primary and secondary schools is devoted to capital expenditures, 4 points above the average and one of the highest shares in the world (or the subset for which the OECD reports data).

Current — as opposed to capital — spending in the U.S. shows an unusually large share devoted to administrative and support staff, and a small share devoted to teachers’ salaries. But what do our education reformers want to do? Spend more on computers and other gadgetry, and break teachers’ unions and cut their salaries.

(More on this in #133, but one reason for the high administrative costs in the U.S. is the fragmentation of school systems. Every little town has its own system — a huge duplication of effort.) 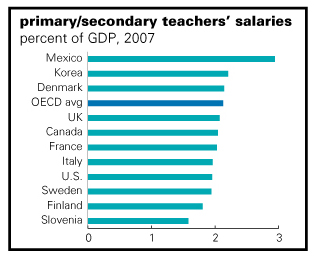 Putting all that together, as the graph above shows, the share of GDP devoted to teachers’ salaries is rather low in the U.S. Big spending on teachers doesn’t necessarily guarantee good results. But this is a strange place to be directing the budgetary axe. 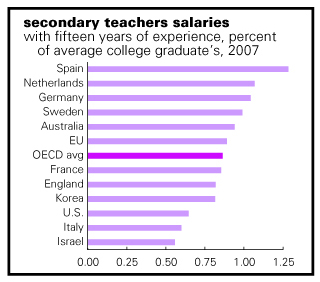 This is not the way to attract talented people into the field. Nor is not giving people healthy raises as they gain experience (see graph below) — but “reformers” want more turnover, not less. The charter model is to hire fresh college grads and work them madly for a few years, until they run off to law school or something. 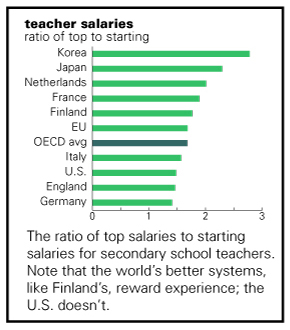 A skeptic might counter, yes, but U.S. overall incomes are higher than many foreign countries, so teachers are doing pretty well in absolute terms despite their poor standing relative to other occupations. But that skeptic would be wrong. An American primary school teacher is paid about $40 per hour of teaching time, $10 below the OECD average, and more than $16 below Finnish rates. Upper secondary teachers (see graph below) earn $45 per classroom hour in the U.S. $26 below the OECD average, and almost $37 below Finland. 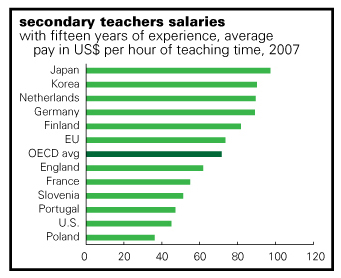 Sometimes you hear earnest liberals say we need to increase the “prestige” of teaching. It’s a very high prestige occupation in Finland, quite competitive, so maybe if we raise its prestige here, we’ll get better outcomes. But it’s not clear how we could do that merely by chanting mantras. If we’re serious about improving our schools, then we should be raising pay, not scheming to cut it.

The U.S. was a world pioneer in mass education — basic education in the 19th century, higher ed in the 20th. We are now a leader in undoing that legacy, making war on our public schools, and making higher education more expensive and less accessible to all except the rich and precocious. Our elite universities are some of the finest in the world, and are likely to stay that way for some time, but less exalted public institutions are under constant budgetary assault. It’s what you’d expect of a society that rewards its top 1% so well. As noted above, less than a quarter of Americans in their 20s — 23% — are enrolled in some sort of school, putting us 17th in the OECD’s universe. Finland, the leader, is 20 points ahead; most other Western European countries are 5–10 points ahead. In 1995, 19% of Americans in their 20s were in school, a point above the OECD average, and just 11 points behind the then-leader, Denmark. Most other Western European countries were less than 5 points ahead of the U.S.

But we do reward people with degrees: the U.S. has one of the largest earnings premiums for people with at least a bachelor’s degree in the OECD’s world (see graph below ). Someone with a bachelor’s earns 77% more than someone with only a high school diploma (or their international equivalents), 24 points above the OECD average. The college premium looks to be broadly associated with the general level of inequality, with Brazil and the U.S. at the top and Sweden at the bottom. 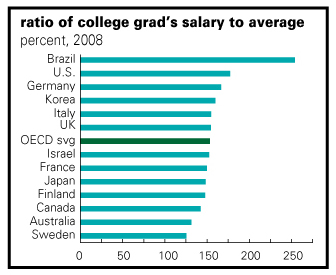 People across the spectrum say that education is the key to reducing poverty and inequality, but the U.S. looks rather poor at providing it. And all anyone in power wants to do is make already low-paid teachers miserable and give more tests. You’d almost think that college enrollment rates are kept low to maximize the wage premium, but it seems unlikely that anyone has sat down and figured that out.

Of course, all this assumes that formal education is basically a good thing — that it makes people healthier, more productive, and better able to understand the world and to govern themselves. If you don’t buy that, then the sagging enrollment figures are nothing but good news.

LBO #133 will take a look at what all our spending on education yields, as reported by the OECD’s program of internationally comparable tests, the Programme for International Student Assessment (PISA). Not to spoil the suspense, but the U.S. doesn’t do so well.

Stats on this page come from the Organisation for Economic Cooperation and Development’s Education at a Glance 2010 and associated spreadsheets. (They have an idiosyncratic notion of a “glance”: the book is 474 pages, and the 27 Excel data files total 21 megabytes.) For most of these stats, the OECD reports data for 25–30 countries, most of them in the rich North, but not all. Poorer countries, which it calls “partners,” include Brazil and Russia. Graphs on this page show only “curated” subsets of the full run of data.